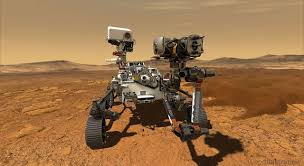 The newest Mars rover, Perseverance, successfully landed on Mars on February 18, 2021. It landed in Jezero Crater and is going to seek signs of ancient life. It also will collect rock and soil samples for at least one Mars year (about 687 Earth days).

Perseverance (nicknamed Percy) is the biggest and most advanced rover NASA has ever sent out into space. It took seven months and 300 million miles from the spot at Cape Canaveral where it launched for it to get to Mars. Percy has 23 cameras, two microphones (which means we will finally be able to hear on Mars), and seven science instruments used to measure and study Mars.

The Seven Minutes of Terror

True to the name, the Seven Minutes of Terror is the scariest part of landing a rover. When Perseverance enters the atmosphere of Mars, it has to go from 12,500 miles per hour (20,000 kilometers per hour) to zero in about 7 minutes. This has to be done autonomously because since Mars is so far away from Earth, it takes about 11 minutes for a message to be sent and received. This means that when NASA scientists hear from Percy that it has entered the atmosphere, the rover in actuality has already landed safely on Mars.

The rover enters the atmosphere and after a few seconds, releases a parachute to help slow it down. Twenty seconds after the parachute opens the rover is exposed to the atmosphere of Mars and cameras and instruments can begin locking in on the surface. Its radar bounces a signal off the surface to find out its altitude. Using a special camera to identify features on the surface, the rover is then able to compare these to a map to see exactly where it is heading. This way Perseverance is able to see if it is heading towards a more dangerous terrain and it can pick the best and safest spot to get ready for the next step.

The parachute is only able to slow the rover down so much so Percy must ride the rest of the way down using rockets. Directly above the rover, inside the backshell, is the rocket-powered descent stage. It is like a jetpack with eight engines pointed down at the ground. Once it’s about 6,900 feet (2,100 meters) above the surface, the rover separates from the backshell, and starts the engines.

After the rover levels out and slows to its final descent speed of about 1.7 miles per hour (2.7 kilometers per hour), it starts the “skycrane” maneuver. With about 12 seconds left before Percy either successfully lands on Mars or crashes into the surface, the descent stage lowers the rover on a set of cables. The rover unstows its mobility system, locking its legs and wheels into a landing position. As soon as the rover can tell that its wheels have touched the ground it cuts the cables that connect it to the descent stage. This lets the descent stage fly off and make its own crash landing far away from Perseverance.

The place that Perseverance landed in is crucial to the mission. Jezero Crater is believed to have once been a lake on Mars and home to a water river delta more than 3.5 billion years ago. There is a very high chance that microbial life could have lived in this lake and if so, some signs of them could still be preserved.

What’s so special about Perseverance?

Percy is very special compared to the other rovers that have gone to Mars because of two main things. First, attached to Perseverance’s belly there is a drone called Ingenuity. If Ingenuity manages to fly, it will be the first flight on another planet. The second exciting thing about Percy is that it will be actually drilling into Mars, taking those samples and sealing them in plastic tubes, and then dropping them on the surface of Mars. There is a plan for another mission to go pick up those samples and bring them back to Earth in a few years.